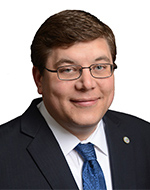 Chairman Jeremy Zellner is one of the youngest Democratic leaders in New York State. As chair of the Erie County Democratic Committee, upstate New York’s largest political party, he leads an organization of more than 1,800 committee members.

A party volunteer in 2003, Jeremy rose to Staff Aide, then Executive Director, and was elected Chairman in 2012. Along the way, he combined a fierce work ethic with innovative management ideas, implementing new voter outreach strategies to propel the Democratic Party into the internet, social media age, and return it to its progressive roots of as a voice for those citizens who have none.

Jeremy is a graduate of Buffalo State College, where he majored in Political Science and received the 2005 David Bullough Memorial Award for Most Outstanding Political Science Student. He developed his theories on the role of political parties in public policy as an undergraduate, and first applied his ideas as a staff member on an Erie County Executive campaign in 2003. The experience taught him how to use new technology approaches in the 16-hour day, weekend-long working environment that defines all campaigns today.

Chairman Zellner also held an important policy post with the Erie County Legislature, where for two years he served as Chief of Staff to the Democratic Majority. Most recently he served on the Hillary for America National Finance Committee. In addition he served as a Statewide At-Large Delegate to the Democratic National Convention in Philadelphia.

As Democratic Chair, Jeremy concentrates much of his efforts building the Party and assisting candidates in a broad range of campaign activities. Firm in his conviction that principle must drive politics, he has set a high standard for ethics and integrity among party staff, employees, and volunteers.

Through his relationships with public officials and activists throughout New York State and across the Nation, Jeremy has established an effective fundraising structure that has raised more than $3 million for the Erie County Democratic Party. He invested some of these funds into the creation of one of the most advanced digital printing and direct mail systems ever used to support local candidates.

The son and grandson of auto workers, Jeremy Zellner is a life-long resident of Erie County, where he lives in the City of Tonawanda with his wife, Carrie, their son, Rory and daughter Ryan.